Our customer produces high-end packaging glass containers for world class drinks manufacturers and needed a solution to automate the application of a metal motif to a bottle. The solution would need to have a quick cycle time and be able to be continuously fed with bottles and motifs so there was a steady throughput, most importantly the application needed to be precise and stick fast. Initially bottles were embellished by hand but as demand for the bottle grew we were engaged to provide an automated solution. As we became involved in the design of a system we discovered a number of key factors in producing the output required and reducing any risk of failure of the adhesive between glass and metal. We delivered a standalone machine installation that met the needs of the customer and also improved the quality of end product as well as reducing the cycle time. We have since delivered a subsequent machine to meet their rising demands. 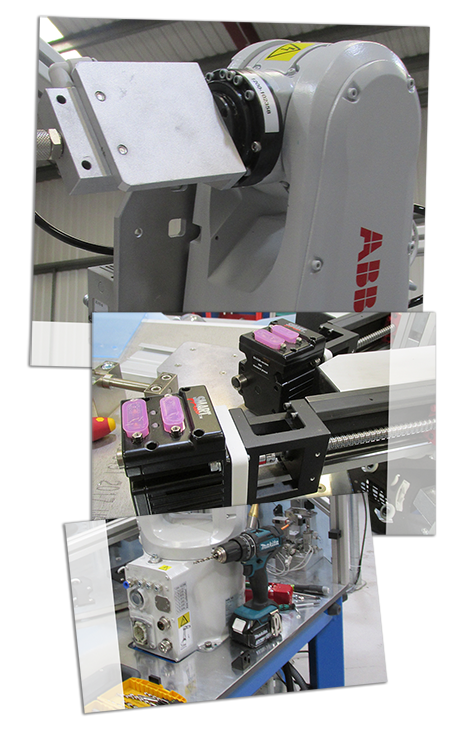 What seems like a regular task wasn't exactly regular, glass bottles by the very nature of manufacture cannot be 100% identical at the levels of precision we work at, the metal motifs developed a thin oxide coating, bottles and motifs could be subject to handling and we would have to overcome these factors. Failure of adhesion later down the line, in a customer facing position was not acceptable.

To ensure an effective application, our solution would require that the bottles were completely clean and the motif would need to be treated to remove the oxide. Early testing showed us that the oxide layer could not be removed too far in advance as it quickly recovered to a point where it could affect adhesion. Cleaning the residues from the bottle would be done with plasma based technologies, this method would remove any potential contaminant in a non contact fashion. A solution for the motifs would involve a laser system that would clean the oxide from the badges only seconds before the application of adhesive, therefore removing any chance for a regrowth of the unwanted layer.

To achieve the stacked processes we designed a system around an indexing table where the bottles could move through a number of stages; positioning, sensing correct positioning, cleaning, sorting and presenting the motifs, cleaning the motif, application of adhesive, motif application with just the right force to spread the adhesive, curing and finally outputting the bottle. The table system would allow for multiple bottles to be processed at the same time and producing a steady stream of output.

The system would feature ABB PLC control and safety, an articulated ABB IRB robot arm, and among other technologies would employ a number of Moog Animatics SmartMotor enabled actuators greatly reducing cable requirements and allowing for a compact design. The system also would include a bowl feed and delivery system that delivered motifs in uniform orientation by a linear track for quick pick and place by the robot.

The machine met the demands of the customer and was able to produce bottes consistently to the standard that their customer expected, an order for a second machine to meet increased end user demands testifys to the efficacy of this solution and the confidence in SMS.